“These murder club meetings are becoming a regular thing. We need a new name, though.”

On Monday afternoon, five students at Bayview High walk into detention.
Bronwyn, the brain, is Yale-bound and never breaks a rule.
Addy, the beauty, is the picture-perfect homecoming princess.
Nate, the criminal, is already on probation for dealing.
Cooper, the athlete, is the all-star baseball pitcher.
And Simon, the outcast, is the creator of Bayview High’s notorious gossip app.

Only, Simon never makes it out of that classroom. Before the end of detention Simon’s dead. And according to investigators, his death wasn’t an accident. On Monday, he died. But on Tuesday, he’d planned to post juicy reveals about all four of his high-profile classmates, which makes all four of them suspects in his murder. Or are they the perfect patsies for a killer who’s still on the loose?

One Of Us Is Lying is the first contemporary YA I had picked up since I read Everything Everything by Nicola Yoon about two years ago before I hit a HUGE reading slump. I am so glad that I did because it’s reinvigorated my love for a good contemporary story. I had read a few fantasy, science fiction and dystopian novels but I contemporary YA books are still new to me. One of Us Is Lying also threw me back into reading books from different perspectives and I loved the way in which Karen McManus created each character and their perspective.

The story was fantastic and gave me strong nostalgia vibes back to my last few years in high school, thinking back on who was who in the school and my “stereotype”. I felt that I really connected with Bronwyn and Addy. I wasn’t super smart and I wasn’t really an anybody in my year. I was able to fly under the radar but was bullied when people would notice me. The characters felt genuine and easy to relate to, each had a secret that felt like the end of the world. Don’t get me wrong, the characters secrets were heartbreaking and at 17 they would have felt like the end of the world to me if they got out.

As the book comes to an end the story unravels into a twist that I never saw coming. I really appreciated the way that the mystery was told from the four separate perspectives of the characters as it added suspense and intrigue to a brilliant story. One of Us Is Lying is a great introduction for YA readers into “whodunnits”. While it touched on some very serious and heavy subject matter, it was written in a way that was easy to read and understand. 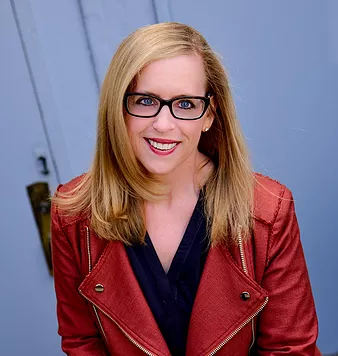 Karen M. McManus is the New York Times bestselling author of the young adult thriller One of Us Is Lying, which has been translated into 37 languages worldwide. Her second book, Two Can Keep a Secret, will be released in January 2019.

Karen lives in Massachusetts with her son. She holds a master’s degree in Journalism from Northeastern University, which she mostly uses to draft fake news stories for her novels.

11 thoughts on “One Of Us Is Lying – Karen McManus”