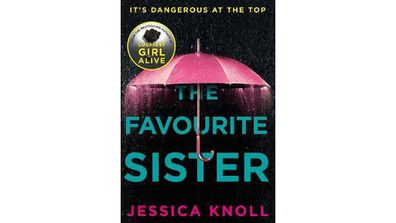 You can purchase The Favourite Sister from Pan Macmillan Australia

Brett and Kelly Courtney are the shining jewels in a New York-based reality TV show called Goal Diggers. One of the most popular shows on American national television, its fiercely competitive cast of five self-made women are defined by their success, beauty, and ruthless drive to reach the top by whatever means necessary.

The Courtney sisters’ rivalry goes skin deep despite the blossoming business they have built together that helps disadvantaged women in Morocco. Harbouring bitter jealousies and dark secrets about their manufactured screen lives they’re joined by three other hyper-competitive women who all have their own agendas. And the latest season promises sparks to fly in the quest for even higher ratings.

Vicious backstabbing, scathing social media attacks, and finely-tuned scripting draw in the viewing public every week, all orchestrated by the show’s omnipotent producers. But even they don’t know that season 4 will end in murder…

Jessica Knoll, the best selling author of the Luckiest Girl Alive, brings to life the world of reality television in the age of the women rising to success movement. This contemporary summer feel story delivers a binge-worthy read about feminism, competition, and murder. The Favourite Sister dives behind the scenes of reality TV shows and as the reader, you become acquainted with the dangerous perspectives to the business of being on television.

The Favourite Sister is a character-driven story that follows the B-Grade stars of Goal Diggers the hottest reality TV show that features goal driven female millennials who all own businesses they have built on their own. The story starts with Brett’s sister, Kelly discussing her loss the present before taking a jump back to a few months earlier. Each chapter is told from the perspective of the central characters Brett, Stephanie, and Kelly. Having the chapters structured this way was great and helped to develop each of the characters back stories. Personally, at the start of the story, I really disliked hearing Stephanie’s story and her perspective was frustrating and aggravating. It added extra elements to the storyline and was her personality was perfectly placed as the antagonist.

Each relationship between the characters is complex and intricate which I found incredibly interesting. They are all intertwining and every twist and turn is calculated and planted earlier in the story, laying in wait for it all to play out. Reading about how these women have dug themselves some pretty big holes created some really amazing twists that were really well designed. The dynamics between the cast members of Goal Diggers added depth and intrigue to the plot, each female cast member having quips and defense mechanisms to protect their onscreen personas.

The message of feminism is present throughout the book, however, I can see cracks appearing of internalised misogyny especially with how the women in the story treat each other. I really appreciated the incorporation of feminism into the story and how distorted it can become in the business world. Possibly due to the expectations of women in the corporate scene? Knoll doesn’t expand on this idea though, but the center focus of the television show is meant to be women supporting women, it doesn’t necessarily mean that this is what happens on the show.

Although this story took me a little longer than usual to read, it was written fantastically with a gripping tone. I really enjoyed the twists and turns that the story took, Knoll carefully planted all the seeds to a fantastic mystery that kept me hooked. The secrets and the lies were intricately crafted to the point where when you read the twists you will be left with your mouth hanging open in disbelief (like I was!). The Favourite Sister is the first novel I have read by Jessica Knoll and I am certain it won’t be my last!

All reviews and opinions are solely my own and I am not paid to review or publish any reviews. Thank you so much to Pan Macmillan Australia for sending me a copy of this title to review in exchange for an honest review.